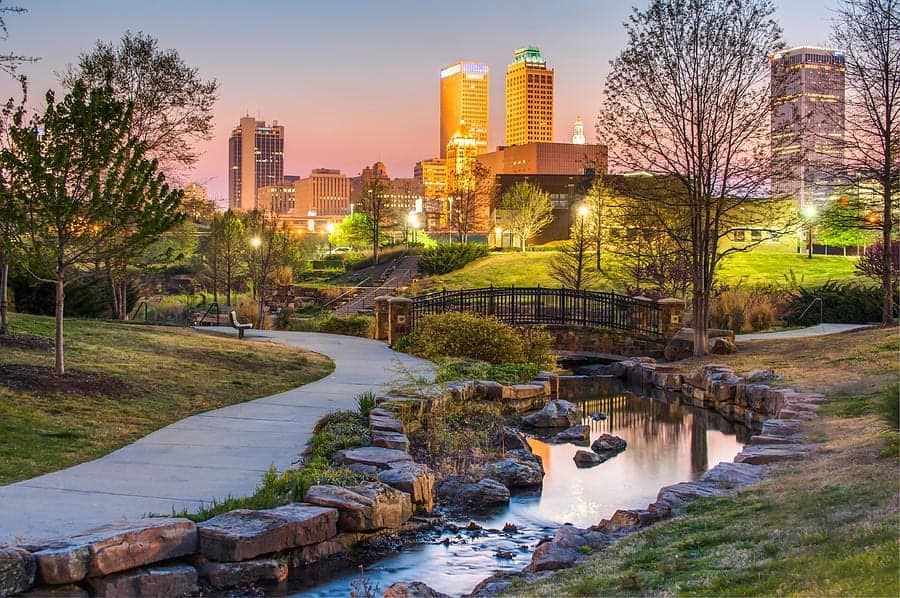 Tulsa is the second-largest city in Oklahoma and has a population of about 401,800. It’s located in the northeast part of the state known as “Green Country,” because of its serene low rolling hills and beautiful wooded areas. Tulsa sits on the Arkansas River between the Osage Hills and the foothills of the Ozark Mountains.

Even though it’s a large city, traffic is nonexistent compared to other cites. It’s sunny almost every day, even during the winter. The people in Tulsa (called Tulsans) are friendly, trustworthy, and avid sports fans.

Two universities within the city have top sports teams at the NCAA Division I level. They are the Oral Roberts University, and the University of Tulsa.

In the past, Tulsa’s economy mainly consisted of the robust fuel industry. Today that’s changed, and there are more key industries which include transportation, health care, manufacturing, technology, and aerospace.

Both the performing arts and public radio are well supported, probably proportionate to much larger cities. With two art museums, full-time professional opera and ballet companies, and one of the nation’s largest concentrations of art deco architecture, Tulsa is considered the cultural and arts center of Oklahoma.

Although the city’s population is around 402,000, the metro area’s population is much higher at approximately 1,000,000 residents.  Housing is affordable with the average sale price at $204,022.

Affordability, along with low-interest rates, makes the Tulsa real estate market a good investment for a primary home or investment property.

When you’re looking to buy, location is essential. Some of the best neighborhoods in Tulsa are:

The Maple Ridge Historic District is a more expensive area with listing prices hitting near $600,000. Whereas if you’re looking for an extremely affordable area – check out Cooper with a median listing price of just under $80,000.

When you’re looking for a home loan in a big city like Tulsa, it’s essential to use a local mortgage company like Total Lending Concepts that you can trust. We’re not a huge corporation that never answers their phone. We’re your local lender, located right in downtown Tulsa. You can come in anytime and meet us face to face.

Branch Manager, Steve Currington, and his team have the experience you need for any mortgage loan. They’re willing to take the time you need to get all of your questions answered, and walk you through each step of the entire loan process to make sure your home loan process is smooth and enjoyable.

We offer a wide variety of lending products for both purchasing and refinancing.

"This company was extremely easy to work with. Made the home buying process as stress free as possible. Would highly recommend working with Kacey Jones. She was very helpful and easy to get in touch with. She was more than willing to answer any question we had even for the smallest things."

"When I Steve told me he could close a mortgage loan in less than 21 days, I thought okay time will tell. But, he did! He provided above and beyond personal care for my client making one of the biggest purchases of their lives. He treats all clients with equal care whether they are a $500,000 client or a $150,000 client. He and his team are fantastic!"